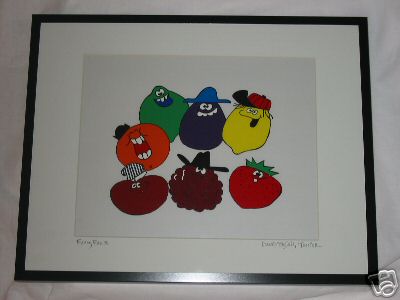 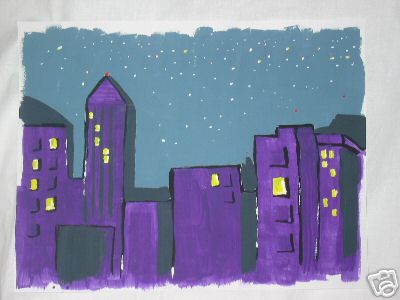 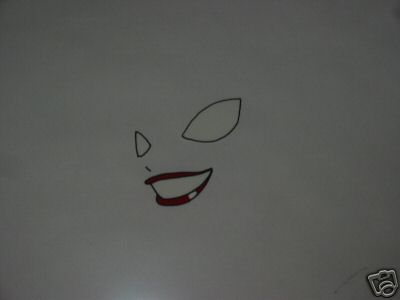 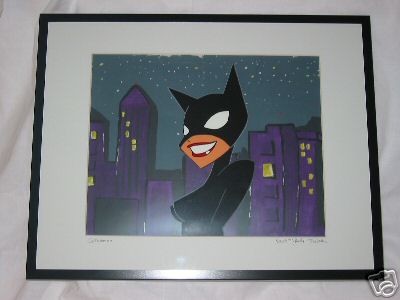 Here are but a few examples of our many commissioned works:

All you need to know about each term used to describe a piece of CREEKRAT® Custom CARtoons Animation Art.  The term "persistence of vision" describes the optical phenomenon that makes animation possible. The human eye retains an image fer a split second after the source of the image disappears, so when 24 frames per second of an animated film zip through a projector, the flow of motion on the screen looks seamless.

A cel (short fer celluloid) is a blank clear plastic sheet used by the studio artist to paint an animated character or object based on the animator's original pencil drawing. The cels are then placed over a background and photographed in sequence to produce an illusion of life in the completed film or cartoon short. Every cel is different but this does not mean that every cel is unique. Often multiple copies of a cel were created by the Inkers as colour models in order to advance their technique and skills.

An animation cel made from cellulose nitrate which unfortunately is a very unstable material prone to shrinkage, wrinkling and yellowing over time. Nitrate cels were used throughout the Disney studios during the 1920's until the early 1940's. Other studios used nitrate cels upto and including the 1950's.

An animation cel made from cellulose acetate. This material is still used in the studios today as it is of a very stable nature.

Simply a combination of two or more cels. The cels can be placed with a background or without a background, and can be either matching with the background (the way the image appeared in the short or film) or non matching (they do not appear together in the film but just appeal to the collector).

This refers to the size of the area on the artwork which falls within the sight of the camera. Measuring approximately 10.5" x 12.5" this is the standard size fer cels, backgrounds and drawings.

This refers to the size of the area on the artwork which falls within the sight of the camera. Measuring approximately 12.5" x 16.5" this is the standard size fer cels, backgrounds and drawings.

In moving camera shots wider cels, backgrounds and drawings were used. Panoramic (Pans) were often referred to as a 12 field double pan (10.5" x 25") or a 16 field one and a half pan (12.5" x 24"). A prime example of where pan cels were used in numerous scenes in order to accommodate the need fer the wide screen process, are in the films shot in cinemascope or technorama.

Any cel created fer the production of an animated film or cartoon short. This does not necessarily mean that the piece appears in the film. Model cels and preliminary art are all production artwork.

A cel created and painted by a studio artist fer publicity display or promotional purposes. Normally hand painted in the perfect pose.

The Courvoisier setups share a few distinctive features; a simple presentation or wood grain background, a cream coloured matt with the title of the production (or the name of the character) inscribed in pencil below the matt opening, a "WDP" stamp or a 3" x 5" label stating the name of the production. Generally, characters are trimmed to the size of the image and attached to the backgrounds, and occasionally were enhanced with airbrushed shading or dry brush effects. The backgrounds ranged from basic airbrushed techniques depicting stars or dots, to detailed watercolour backgrounds created by the Disney background department. Often the cels from Dumbo, Bambi and Fantasia were laminated.

Cels which do not carry any seals, stickers or certificates are not necessarily forgeries. The majority of this type of artwork either comes from artists or employees of the studios who received the artwork as a gift, or is simply artwork which the artist has drawn and has taken home as a memory of the project. It wuz also common fer artists to take home other artists work as inspiration fer other projects they themselves were working on.

A non production hand painted cel created fer sale to the collectors market. It is produced in fixed limited quantities and are easily identified by a fraction (150/500) in the lower right hand corner. They were not used in films or cartoon shorts, and the original intent wuz to recreate the original production cels. Nowadays many studios release new images not based on production artwork.

A non production cel created by means of a printing process similar to silk screening. No work is done by hand, therefore no painting or inking is involved. They are often produced in limited quantities of 5000, and they are marketed as a low cost alternative to production and limited edition cels.

A drawing on paper in pencil, sometimes coloured which is created by a studio artist of an animated character or object fer which the cels are later created.

A rough drawing created by an animator on paper, in pencil, indicating a position or pose of a character or object.

These drawings are created by the assisting department and represent the final stage of animation before the image is transferred to the cel. The sketches can often include colour lines to indicate different ink colours, and notes to the ink and paint department about parts of the character or background in a relevant scene.

A series of drawings similar to a comic strip depicting a basic storyline of the film or cartoon short. These drawings will be pinned up on a bulletin board and placed in the order of the storyline.

A detailed drawing of either the background or environment in which the character or object exists, or an outline of the characters path of movement, its expressions and action within the scene.

Created by the artist to develop the atmosphere, mood or design of the character or setting.

Drawings created by artists showing a particular character or object in many different poses and positions. These drawings will each be cut out and pasted onto a model sheet. This in turn will be photostated and given to various departments to ensure consistency between all artists working on a project. Hundreds of photostats will be produced from a single model sheet.

A background originally painted by a studio artist, and actually photographed in the production of the final released version of the film or cartoon short. A background painting sets the scene in which the animated character appears.

This is often referred to as a key master background setup, but is simply a cel or cels with the background from the same scene that were originally photographed. When framed these will look exactly as they do in the original film or cartoon short.

This background has been painted by an independent artist to enhance the cel. Generally it will be in the style of the original.

This is the most common type of background. It is a reproduction of the original background by means of lithography, seriagraphy, colour copying or photography.

These images (prints) are created using a simple print process. They are mass produced items.

Prior to the late 1950's all animation drawings were traced onto cels by using a brush or quill pen.

By the late 1950's Disney studios developed Xerographic process to transfer the animator's drawings directly onto cels. The Xeroxed lines appear to be more sketchy than hand inked lines. This is because they are transferred direct from the animator's drawings and seem to keep a sense of life. This is something that hand inking often lacks. Sleeping Beauty wuz the first film to adopt this process.